What a delight to any company 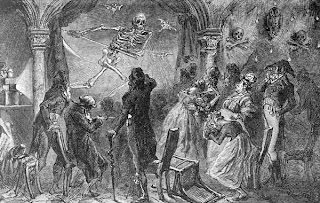 A man, named Robertson, once gave exhibitions in Paris, in an old chapel, and at the close of his performances he generally caused a great skeleton figure of Death to appear among the pillars and arches. Many of the audience were often nearly scared to death by this apparition. The more ignorant people of Paris who attended these exhibitions, could not be persuaded, when they saw men, women, and animals walking about in the air between the arches of the chapel, that Robertson was not a magician, although he explained to them that the images were nothing but the effect of a lantern and some glass lenses. When these people could see that the figures were produced on a volume of smoke, they were still more astonished and awed, for they thought that the spirits arose from the fire which caused the smoke.

But Robertson had still other means of exhibiting the tricks of light. Opposite is a picture of the "Dance of Demons."

This delusion is very simple indeed, and is produced by placing a card-figure on a screen, and throwing shadows from this upon another screen, by means of several lights, held by assistants. Thus each light throws its own shadow, and if the candles are moved up and down, and about, the shadows will dance, jump over each other, and do all sorts of wonderful things. Robertson, and other public exhibitors, had quite complicated arrangements of this kind, but they all acted on the same principle. But all of those who exhibit to the public the freaks of light are not as honest as Mr. Robertson. You may have heard of Nostradamus, who also lived in Paris, but long before Robertson, and who pretended to be a magician. Among other things, he asserted that he could show people pictures of their future husbands or wives. Marie de Medicis, a celebrated princess of the time, came to him on this sensible errand, and he, being very anxious to please her, showed her, in a looking-glass, the reflected image of Henry of Navarre, sitting upon the throne of France. This, of course, astonished the princess very much, but it need not astonish us, if we carefully examine the picture of that conjuring scene.

Frank Richard Stockton: Round-about Rambles in Lands of Fact and Fancy
at February 24, 2009 No comments: