Bombs and other explosives were to be used in Finland 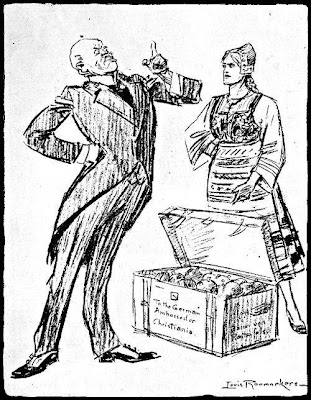 Christiania, June 24, 1917. The police on Saturday arrested a certain Baron von Rautenfels, who declares that he was born in Finland, but is now a German subject, and two Finlanders. At their lodgings and in the luggage of these persons the police found nearly a ton of explosives of a very powerful variety. Part of these explosives was made up to resemble coal briquettes, and was all ready to be mixed with the coal in ships' bunkers. The baron's luggage also contained cigarettes and tobacco mixed with carborundum, which can be used to ruin engines or machinery. The baron and the other arrested persons declare that the bombs and other explosives were to be used in Finland.


Raemaekers' Cartoon History of the War, Volume 3, by Louis Raemaekers
at November 22, 2013 No comments: