Lapland, where I now am, and from whence I send you this letter 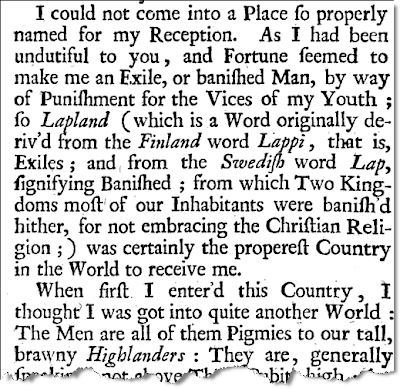 The history of the life and adventures of Mr. Duncan Campbell: a gentleman, who tho' deaf and dumb, writes down any stranger's name at first sight: with their future contingencies of fortune. Now living in Exeter-Court over-against the Savoy in the Strand (1720)
(Information on Duncan Cambell in Wikipedia)
at November 28, 2011 No comments:

Gambolled away gracefully as a Finland horse

"Not at all!" replied Herr Kalm. "It is the constant use of the life-giving infusion of tea that has saved China! Tea soothes the nerves; it clears the blood, expels vapors from the brain, and restores the fountain of life to pristine activity. Ergo, it prolongs the existence of both men and nations, and has made China the most antique nation in the world."

Herr Kalm was a devotee to the tea-cup; he drank it strong to excite his flagging spirits, weak to quiet them down. He took Bohea with his facts, and Hyson with his fancy, and mixed them to secure the necessary afflatus to write his books of science and travel. Upon Hyson he would have attempted the Iliad, upon Bohea he would undertake to square the circle, discover perpetual motion, or reform the German philosophy.

The professor was in a jovial mood, and gambolled away gracefully as a Finland horse under a pack-saddle laden with the learning of a dozen students of Abo, travelling home for the holidays.

"We are fortunate in being able to procure our tea in exchange for our useless ginseng," remarked the Lady de Tilly, as she handed the professor a tiny plate of the leaves, as was the fashion of the day. After drinking the tea, the infused leaves were regarded as quite a fashionable delicacy. Except for the fashion, it had not been perhaps considered a delicacy at all.

JOHN continued his search. I accompanied him. I shall not at this stage describe the few suitable supernormal youngsters whom he discovered and persuaded to prepare themselves for the great adventure. There was a young girl in Marseilles, an older girl in Moscow, a boy in Finland, a girl in Sweden, another in Hungary, and a young man in Turkey. Save for these, John found nothing but lunatics, cripples, invalids, and inveterate old vagabonds in whom the superior mentality had been hopelessly distorted by contact with the normal species.
Olaf Stapledon: Odd John
at November 18, 2011 No comments:

Travelling always towards north, we had made, during the finest season of frost, under a radiant and glorious sun, which coloured the waste of snow with a rose-tint, an interesting and picturesque journey. Far more varied than the central provinces of tho Russian empire, and almost mountainous after its interminable plains, Finland offers most pleasing winter landscapes. It presents northern nature in all its most savage yet wild and attractive beauty. I must not forget to mention a small lake, over the frozen surface of which we passed from one end to the other to shorten the distance, between two lines of young fir plantations, so planted as to mark the road during the night as during the snow storms. This lake, at least six miles long, had the appearance of a small sea ; but, [in comparison with the lake Lagoda, and other lakes in the north of Russia, it is a mere pond. It is charming to look on, and still more charming to glide over when comfortably seated in a sledge, enclosed by surrounding rocky and wood-clad heights; indeed, it resembles a large white table-cloth spread over, the earth. And as you slide rapidly over its frozen surface, innumerable are the varied features it presents of dense forests and rocky inlets which line its interesting banks. Now a little bay is seen sleeping, as it were, in the midst of dense pine woods, the large dark branches of whose trees, sugared with frozen snow, stretch their arms as if in protection; while here and there a promontory extends itself, on whose granite headland a village church, with a palc-grccn cupola, or some country house of strange form, and still stranger architecture—half Eastern, half European—stands, regardless of place or weather.

Linton: Russia, and its field sports
The Sporting review, ed. by 'Craven'. edited by John William Carleton
at November 14, 2011 No comments:

From Riga, Reval, and Petersburg, steamers rim to Helsingflors, a watering-place greatly frequented in summer; and thence others carry the traveller to Wiborg, Abo, and Stockholm. The Storfursten bore us in six hours, on a sunshiny afternoon, from Reval to Helsingflors. It was a lovely evening when we approached the celebrated harbour, and steamed in past the fortress of Sveaborg, which truly merits its title of the "impregnable," and the Russian emperor is well aware that he possesses in this granite rock a jewel more valuable than the finest in his diadem. The grey-brown rocks, the red-brown wooden-houses, planted upon it with military regularity, the long cannon which peep out from the embrasures, a large hull which has been covered with a roof, and so forms half-house, half-ship—all these are very adapted to a fortress, but at the same time make such a triste impression, that the traveller is glad to escape into the inner harbour out of reach of the many-pounders, and approach the cheerful town of Helsingflors. But before landing we had to endure a highly unpleasant siege from the touts who came on board, of both sexes. The hotels of the second and third class are said to have only woman servants, who receive no wages from the landlord, but depend on douceurs from the guests. The " Societats hus," an hotel of the first class for Finnland, has good attendance, and deserves a word of praise, though it has lost much of its former renown, and is far inferior to German hotels of the same rank as regards elegance and arrangement.