The ex-king of Greece on the throne of Finland

There are now 1,000,000 Americans in France. But the Kaiser and his War-lords are still passing their victims through the fire to the Pan-German Moloch, and threatening to send German generals to teach the Austrian Army how to win offensives. It is even reported that the Germans contemplate placing the ex-king of Greece on the throne of Finland. Fantastic rumours are rife in these days; but there is only too good reason to believe the report that the ex-Tsar, the Tsaritsa, and their daughters have all been murdered by their brutal captors at Ekaterinburg. It seems but yesterday when Nicholas was acclaimed as the Saviour and regenerator of his people, and now Tsardom, irrevocably fallen from its high estate, has gone down amid scenes of butchery and barbarity that eclipse the Reign of Terror in France.

At the end of four years' study under Joachim he was refused a certificate, for some reason not stated, and he went to Helsingfors in Finland, where he worked according to his own ideas, which were to unlearn all he had studied, and begin afresh. During this period he worked with the greatest perseverance, practising nine or ten hours a day, and thus developed the wonderful technique which has astonished the world. For three years he continued this work,supporting himself meanwhile with a modest appointment which he had obtained.

Henry C. Lahee: Famous Violinists of To-day and Yesterday
at July 19, 2010 No comments:

Some small urchins begged of us

Our steamer is a fine one and we are quite comfortable. I have a stateroom with a Finnish lady, who is charming for she goes up on deck at 4 A. M. and lets me dress in peace and quiet and then she arrays herself. Unfortunately we have a cracked basin, so it is rather hard work to dress comfortably, but they have promised another for tomorrow. Ed. has a stateroom with Mr. Calmeyn who decided to go to Petersburg, so he is all right. He has captured a small girl who came on board to sell flowers, so he is happy drawing her. She is quite pretty and is posing beautifully. We went round the town and saw the old Cathedral and also a fine view from the Observatory. The people here speak Swedish or Finnish, not Russian. Tomorrow we go to Helsingfors and thence by rail to Petersburg. We took some time to get here and came quite a distance up the river to anchor alongside the quay. The town is extremely clean and the people ditto; but some small urchins begged of us, whilst in Norway such a thing is unknown.

Her friends directed her thoughts to charity. On the one hand, she saw poverty which was real and repulsive, and a sham poverty even more repulsive and pitiable; on the other, she saw the terrible indifference of the lady patronesses who came in carriages and gowns worth thousands. Life became to her more and more unbearable. She yearned for something real, for life itself—not this playing at living, not this skimming life of its cream. Of real life there was none. The best of her memories was her love for the little cadet Koko. That had been a good, honest, straight-forward impulse, and now there was nothing like it. There could not be. She grew more and more depressed, and in this gloomy mood she went to visit an aunt in Finland. The fresh scenery and surroundings, the people strangely different to her own, appealed to her at any rate as a new experience.

How and when it all began she could not clearly remember. Her aunt had another guest, a Swede. He talked of his work, his people, the latest Swedish novel. Somehow, she herself did not know how that terrible fascination of glances and smiles began, the meaning of which cannot be put into words.

These smiles and glances seemed to reveal to each, not only the soul of the other, but some vital and universal mystery. Every word they spoke was invested by these smiles with a profound and wonderful significance. Music, too, when they were listening together, or when they sang duets, became full of the same deep meaning. So, also, the words in the books they read aloud. Sometimes they would argue, but the moment their eyes met, or a smile flashed between them, the discussion remained far behind. They soared beyond it to some higher plane consecrated to themselves.

How it had come about, how and when the devil, who had seized hold of them both, first appeared behind these smiles and glances, she could not say. But, when terror first seized her, the invisible threads that bound them were already so interwoven that she had no power to tear herself free. She could only count on him and on his honour. She hoped that he would not make use of his power; yet all the while she vaguely desired it.

Leo Tolstoy: The Forged Coupon and Other Stories
at July 08, 2010 No comments:

This is a Motor Car. 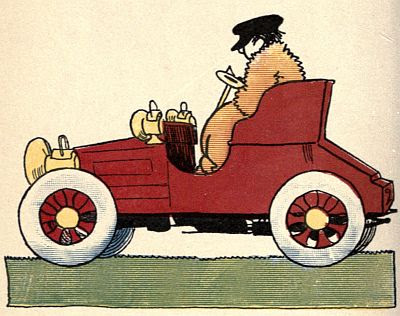 This is a Motor Car. It can travel forty miles an hour. There is a number on the back of it. If the car runs over you make a note of the number and complain to the County Council. That is what the number is for.
The Motor Car Dumpy Book, by T. W. H. Crosland
at July 01, 2010 No comments: