In the Month of September 1741, she pierced her Navel with an Awl

When I wrote this, I had not seen a remarkable Case published in the Philosophical Transactions of September, of a Woman, from whom a Fœtus was extracted, that had been lodged thirteen Years in the Fallopian Tubes, sent from Riga by Dr. James Mounsey, Physician to the Czarina's Army together with the Bones of the said Fœtus, as a Present to the Royal Society of London. The Woman, as we are told in that ingenious Treatise, was a Soldier's Wife of Abo in Finland, of a middle Stature, who, being pregnant for the third Time in the Year 1730, was afflicted with violent Pains and Twistings of the Bowels, &c. and continued sickly for ten Years afterwards. In the Month of September 1741, she pierced her Navel with an Awl, out of which ran a yellow-coloured Water, &c, In the Month of June two small Bones came out, &c. and in October 1742, she was taken in Hand by Dr. Mounsey, and Mr. Geitle, Surgeon, who thurst a grooved Probe into the Fistula, and made an Incision with a Bistory, upwards and obliquely, from the Linea alba, into the Cavity of the Abdomen ; but the Woman being unruly (as well she might) and the Operation not going on according to the Doctor's liking, he proceeded no further till the next Day, &c. At the next Operation the Incision was carried downwards ; but Care taken not to make the external Wound larger than needful, lest the Omentum and Guts should fall out, &c. In short, the Fœtus was at length extracted Piece-meal at several difficult Operations. Now comparing all these Circumstances together, it seems reasonable to believe that this Fruit never was in the Cavity of the Womb, but that the impregnated Ovum was stopt in its Passage through one of the Fallopian Tubes, where it grew and was detained so many Years. Nothing therefore can be concluded from hence against the Cause I have assigned of my Maid's Pregnancy (as a certain learned Gentleman of the Royal Society, who communicated this Story to me, seemed to imagine) for the Cases are very different ; and the uncommon delay of this Finland Woman's Delivery was owing to the præternatural Situation of the Fœtus.

A letter humbly addressed to the Royal Society. Fugitive pieces on various subjects. By several authors. Vol I. 1771

The other Finn was at the wheel at the time 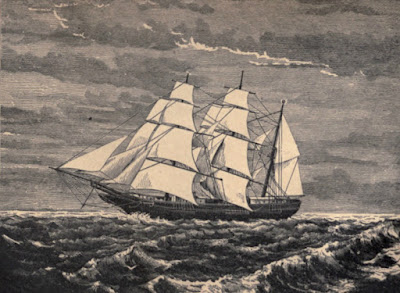 The ship was loaded so deeply and was leaking so much, and moreover had such wretched pumps, that many misgivings were expressed as to her ever crossing the Atlantic safely. The superstitious among the crew were still more disaffected when two Finnish sailors came on board, for a Finn is believed to have dealings with the evil one, and to be a dangerous shipmate. We sailed for Boston one September morning, and beat down the Gulf of Finland. The crew that were shipped at New Diep were to get fifteen dollars a month, but wages were higher in Cronstadt, and the two Finnish sailors had shipped for twenty dollars. They had signed articles to that effect, drawn up by the American Consul. This grieved the captain's economic soul, and the day after we sailed, he called one of the Finns into the cabin and summoned me for a witness. He told the man that if he didn't prove to be a first-class, able seaman, he should cut his wages down to ten dollars a month ; but, if he would sign the articles that the rest of the crew were on, and accept fifteen dollars, he would say nothing about his seamanship. The man was confident of his ability, and had every appearance of a thorough seaman. He understood English imperfectly, and was somewhat bewildered by this proposition, but he realized it was a scheme to defraud him of five dollars a month, and he respectfully declined to sign the new articles, saying, he had signed once before the consul and that was his bargain. After a little useless argument, the captain rose and shut the cabin door ; then he caught the man by the neck with his left hand, and gave him a blow with his right fist that knocked him down. He jumped on his chest two or three times with his whole weight ; and then kneeling on top of him pounded his face severely. The man cried out for mercy and promised to sign. He was then helped to the table and wrote his name on the fifteen dollar articles. The other Finn was at the wheel at the time, and whether he heard anything of what was going on or not, he seemed to lose his head just then, and ran the ship off her course. The mate, perceiving it, struck him and put another man in his place. He was just coming forward as the captain and his shipmate stepped out of the cabin. The bruised face of his comrade startled him, and when the captain told him to go into the cabin he refused, supposing he was going to be beaten for his bad steering. The captain, without further words, seized a belaying pin from the rail and hit him a powerful blow on the head, which cut a deep gash on the side of his forehead, and in a moment his face was one mass of blood. The steward and myself carried him into the cabin, by his head and heels, and seating him on a stool in a state-room, bound up his broken head with strips of sail cloth in lieu of rags. The captain brought a pen to him and told him to write his name on the old articles.
" What ish dis ? " he asked.
"Do as you're told, " said the captain, and the man signed.
The captain then put a pair of handcuffs on the man's wrists, though he was as quiet as possible, and he was left to meditate on the privileges of sailing under that symbol of freedom and justice, the American flag.

No country is better adapted to Botany

This part of Finland is not so extensive as Swedish Finland. It is remarkable that in both countries the productions of nature are sooner ripe in the parts covered with forests, than on the sea-coast and on islands. There the people breathe a more salubrious air. In the towns on the sea, only one of sixty dies annually, while there is born one of forty three. No country is better adapted to Botany. There are enumerated near thirteen hundred different kinds of plants, besides a great number of herbs fit for divers uses. They raise also several kinds of grain, such as wheat, rye, oats, barley, but all of them, especially wheat; in quantities too scanty for the supply of the inhabitants. The interval between seed-time and harvest is from ten to twelve weeks. The Finns apply principally to the culture of tobacco, which thrives uncommonly in their country. As to trees, those which bear fruit, such as Cherry and Plumb-trees, are almost always destroyed by the rigours of winter; the Mulberry is planted and thrives only on the islands ; the Oak does not grow beyond 61, and the Ash beyond 62 degrees.

Helsingfors is not an old city, but has some very fine public buildings 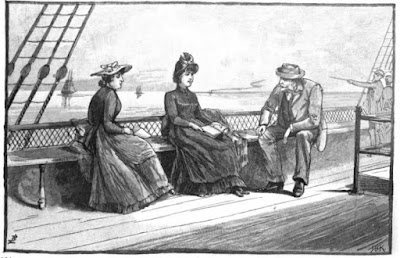 The second day out, we touched at Helsingfors, the capital of Finland. We had always supposed the Lapps and Finns to be quite on a level ; but we found that in this we were greatly mistaken. Finland is not at all the forsaken, half-barbarous land we had pictured it. [...]

Helsingfors is not an old city, but has some very fine public buildings. Most of the houses are built of brick, roughly joined together, covered with a coating of white plaster that resembles stone, and is said to be very durable. Yet Finland is noted for its beautiful marble, most of which is taken to Russia. Many of the smaller houses have double windows, and the ledge between them is filled with dried moss to keep out the cold. The government buildings were striking, but dazzling, with their pure white walls. On an eminence in the distance stood a large Greek church, with walls of red brick, cupolas capped with brazen balls, and roof of snowy white. This was to be painted green — a favorite color with the Russians.

Strolling about the city under the hot sun, we were suddenly startled by the cry of fire. We fol lowed the crowd a long distance. The firemen were very slow — running on foot, with the hose in their hands, while the water for their use was carried in barrels. Several cottages were burned, in spite of the cries and bustle in trying to put out the flames.