Hundreds of fishwives dealing in their finny wares 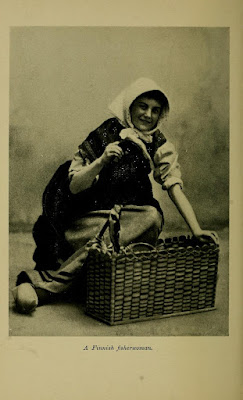 All along the quay at which we landed I noticed hundreds of fishwives dealing in their finny wares. The fish were as various in size and kind as the women who sold them were in appearance and manner. Most of these humble fish-dealers were of uncertain age, and of very uncertain appearance and cleanliness; but I recall several that were extremely pretty in a wild rustic way that was set off charmingly by their picturesque dresses. I secured a picture of one — the Queen of the Quay — who had dark, laughing eyes, a smile that would have made her fortune on the stage, and a manner full of chic and bonhomie. She wore over her head a handkerchief of soft white material picked out with scarlet spots, and loosely knotted under her chin; beneath a tiny shawl of rich brown, decorated with spangles of gilt, she wore a tight-fitting bodice of tender pink; her skirt was a bright green, trimmed down the side with gold braid and at the bottom encircled with rows of black braid. On her bare feet were wooden clogs, and her bare arms and hands were evidently subjects of personal vanity, as she kept them constantly on the move. She made a pretty contrast to some of her neighbours, and was more constantly surrounded by customers than any of the rest, the members of the sterner sex predominating.

If anything could express a solid, uncompromising spirit, it is the Slott, or hoary castle of Abo. One is almost struck dumb by the dreary monotony of its two long, parallel, factory-roofed portions, which, adjoining one another, are surmounted at either end by squat towers covered in the manner of cathedrals patiently waiting a spire. The bare white walls have a few square windows high up their sides; and a completely disturbing effect is increased by gaunt, unrelenting extensions at one extremity. This ancient stronghold, being under repair, did not allow of thorough investigation, but disclosed immensely thick walls, winding staircases, and floors supported by worm-eaten oak beams, such as also roof over the usual large hall and many lesser apartments. In a small adjacent building, which dates from the time of Gustavus Vasa, is a highly interesting historical museum. It were ungracious to depreciate what is plain and downright because of inelegance; yet, as I contemplated the main rude specimen of castle construction, I read in it results of Nature's harsh conditions. To any one reflecting on European civilization, a slow and gloomy far-Northern development but throws into relief the early established artistic feeling and joyous impulses of the South. Clearly, in Western countries knowing Latin influences, the harmonious architectural manifestations of feudal virility surpass the crude expression of untutored might in far-off Finland.