Felix J. Déliée: The Franco-American cookery book; or, How to live well and wisely every day in the year. 1907

Explanations of all terms used in Coockery-Cellaring and the preparation of drinks. 1908

Charles Ranhofer: The epicurean : a complete treatise of analytical and practical studies on the culinary art : including table and wine service, how to prepare and cook dishes, an index for marketing, a great variety of bills of fare for breakfasts, luncheons, dinners, suppers, ambigus, buffets, etc., and a selection of interesting bills of fare of Delmonico's, from 1862 to 1894 : making a Franco-American culinary encyclopedia. 1916
at October 28, 2019 No comments:

Very affecting scenes even among the rugged rocks of Finland

How desolate, how rigid soever the northern climates may be deemed — nature in its rudest state will still in some respect present me with a pleasing prospect. I have been witness of very affecting scenes even among the rugged rocks of Finland. - I have seen there summers finer and more serene than those of the tropics, days without night, lakes so covered with swans, ducks, woodcocks, plovers, &c. that one might say they had forsaken all other waters to come hither and build their nests. The sides of the rocks are frequently covered with moss of a shining purple, and the Kloucva


A beautiful kind of creeper with a red flower

with its flowers of scarlet, and leaves of lively green, having spread abroad a carpet on the ground, meets with the stately fir, and round the dusky pyramid twines its fragrant branches, forming retreats alike adapted to love or to philosophy. In a deep valley, and on the margin of a meadow, stood the mansion of a gentleman of family, where repose was undisturbed, save by the sound of a torrent of water, which the eye saw with pleasure falling and foaming upon the black surface of a neighbouring rock. 'Tis true, that in winter the verdure and the birds disappear together. Wind, snow, hoar frost, and hail envelope and beat upon the house, while chearfulness and hospitality reign within. They will go fifteen leagues to visit each other, and the arrival of a friend proclaims a festival for a week :


The women are of their parties, and 'tis but just that as they bear their husbands company in the wars, they should preside in their entertainments. Instances of conjugal affection, among these people are frequent and extraordinary. The wives of some general officers I have known, have followed their husbands in the field from their first entering into the army. Note of the Author.

they drink the healths of their guests, their ladies, and their great men, to the sound of horns and drums. The old men sit smoaking by the fire and relate the feats of their youth, while the young fellows in their boots, dance to the fife or tabor, round the Finland maid ; who in her furred petticoat, appears like Minerva in the midst of the youths of Sparta.

Bernardin de Saint-Pierre: A voyage to the Isle of Mauritius, (or, Isle of France), the Isle of Bourbon, yhe Cape of Good-Hope, &c. With observations and Reflections upon Nature and Mankind. 1775

Russians and Finns, but with great difference

In the government of St. Petersburg, husbandry is the business of the Russians and Finns, but with great difference. The former live together in valleys, the latter singly or by families.— The former generally labours his old land, the latter strives to lessen his work, at the expence of the parish. They differ also in their instruments of husbandry; the Finnish are more light and simple than the Russian: they use only the branch harrow ; their little country carts are not, like the Russian, on two, but one axle-tree; and the wheels never shod with iron. Some times, they employ two poles, fastened at one end to the two sides of the saddle, and the other two trailing on the ground.


Sketch of the Agriulture of the Russian Empire. The Commecial and Agricultural magazine for 1799. Vol. I. From August to December
at October 17, 2019 No comments:

When the Finlander with surprising boldness and dexterity 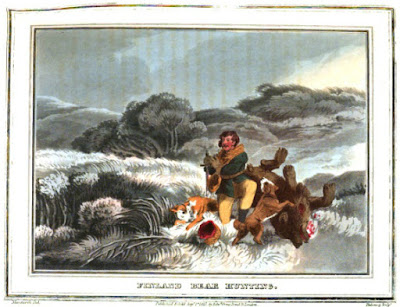 In the Plate, a native of Finland having slain a Bear, is seen, according to the custom of that country, offering thanks to the Deity for his success. The hardy inhabitants of this province seldom shoot the Bears ; but attack them with a short spear, and rarely with any other weapon. They first approach the retreat of the Bear, and by irritating him, induce him to come forth to the attack. As soon as the animal beholds the assailant, he rises on his hind legs, to encircle htm in his grasp, when the Finlander with surprising boldness and dexterity, rushes into the embrace, and plunges the concealed weapon in the shaggy monster's heart.

Would be glad to see Finland absorbed in Russia

The next move which revealed the extraordinary ignorance prevailing in Russia on all matters connected with Finland, was an attempt to stir up class against class ; the Russian press shed ding crocodile tears over the lamentable economical and political position of the downtrodden Finnish peasant, and broadly hinting that under Russian rule he would live in a land overflowing with milk and honey. These tactics had proved singularly successful in the Baltic Provinces a few years ago, when the untutored Letts enthusiastically hailed the Russians as their benefactors, and were impatient for the reforms which would, it was promised, include an equitable redistribution of land. The " reforms " have come to pass since then, and the Letts are painfully picking up ideas on Russian good faith, and feeling like the ill-advised horse who invited man to espouse his quarrel. But the Finnish peasant is shrewd and practical, and he is very well aware that he has an important share in the government of his country. Moreover, unlike the Russian, he never was a serf, and has consequently no particular quarrel with the rod that was never lifted up against him. When, therefore, a few weeks ago the semi-official Novoye Vremya expressed the hope and belief that after all the Finnish peasantry would be glad to see Finland absorbed in Russia, the whole country resolved to record its solemn protest against any such calumny, and would have done so had the government not interfered to prevent it.

A poor Finnish student, who was desirous of returning to Åbo

We had a companion in the person of a poor Finnish student, who was desirous of returning to Åbo, but could not pay his passage; on which Thornton very good-naturedly proposed taking him on board our boat. We picked up some information from him respecting Finland, but not so much as I had expected; our conversation was carried on in Latin, which he spoke readily enough, but after a most barbarous fashion. Once or twice in the course of our voyage we were able to land for a short time, and were much pleased with the appear ance and manners of the peasants of Åland. Castleholm we were prevented from going to